The latest coronavirus news from Canada and around the world Monday. This file will be updated throughout the day. Web links to longer stories if available.

6:08 a.m.: Nearly 4 million doses of the newest COVID-19 vaccine are being delivered to U.S. states for injections starting on Tuesday.

The White House said the entire stockpile of the newly approved single-dose Johnson & Johnson vaccine will go out immediately. J&J will deliver about 16 million more doses by the end of March and 100 million total by the end of June, but the distribution would be back-loaded.

Though the new shot is easier to administer and requires only one dose, the administration is not altering its distribution plans.

The White House is encouraging Americans to take the first dose available to them, regardless of manufacturer.

Advisers to the Centers for Disease Control and Prevention voted overwhelmingly Sunday to recommend the vaccine for adults 18 years old and up. It adds to the vaccines from Pfizer and Moderna that were authorized in December.

6:07 a.m.: The Philippines launched a vaccination campaign Monday to contain one of Southeast Asia’s worst coronavirus outbreaks but faces supply problems and public resistance, which it hopes to ease by inoculating top officials.

Cabinet officials, along with health workers and military and police personnel, were among the first to be vaccinated in six hospitals after 600,000 doses donated by China were received Sunday.

The Philippines has reported more than 576,000 infections, including 12,318 deaths, the second-highest totals in Southeast Asia after Indonesia.

Aside from China’s donated vaccine from Sinovac Biotech Ltd., the government has separately ordered 25 million doses from the China-based company but no date has been set for the deliveries. Health Secretary Francisco Duque III said the delivery of an initial 525,600 doses of AstraZeneca’s vaccine that was initially scheduled for Monday would be delayed by a week due to supply problems.

The government has been negotiating to secure at least 148 million doses from Western and Asian companies to vaccinate about 70 million Filipinos for free in a massive campaign funded by foreign and domestic loans.

6:07 a.m.: Hairdressers across Germany are reopening for business after a 2 1/2 month closure, another cautious step as the country balances a desire to loosen restrictions with concern about the impact of more contagious coronavirus variants.

Monday’s move came after many elementary students returned to school a week ago. It follows a decision Feb. 10 by Chancellor Angela Merkel and Germany’s 16 state governors. They will meet on Wednesday to decide how to proceed with the rest of Germany’s coronavirus restrictions, which at present run until March 7.

Some states also are allowing businesses such as flower shops and hardware stores to open. Most shops have been closed nationwide since Dec. 16. Restaurants, bars, sports and leisure facilities have been closed since Nov. 2 and hotels allowed only to accommodate business travellers.

Germany is expected to remain cautious because a decline in infection figures has stalled, and even been reversed in some areas, as a more contagious variant first discovered in Britain spreads.

On Monday, Germany’s disease control centre reported 4,732 new coronavirus cases over the past 24 hours, compared with 4,369 a week earlier. Another 60 deaths were reported, bringing the total to 70,105.

6:06 a.m.: Health officials in Britain have identified six cases of a highly contagious coronavirus strain first identified in the Brazilian city of Manaus — including one in a person who has not been traced.

Scientists say the variant is more transmissible and may be more resistant to existing vaccines than the original virus, and may be able to infect people who have previously had COVID-19.

The arrivals came days before the U.K. imposed a 10-day hotel quarantine on people arriving from high-risk countries, including Brazil.

Three of the cases of the variant are in Scotland and two in southwest England. The sixth individual has not been identified because they did not correctly fill in a form with their contact details. Public Health England said it was working to find the person and is conducting local mass testing to see whether the variant has spread in the community.

6:05 a.m.: In an industrial neighbourhood on the outskirts of Bangladesh’s largest city lies a factory with gleaming new equipment imported from Germany, its immaculate hallways lined with hermetically sealed rooms. It is operating at just a quarter of its capacity.

It is one of three factories that The Associated Press found on three continents whose owners say they could start producing hundreds of millions of COVID-19 vaccines on short notice if only they had the blueprints and technical know-how. But that knowledge belongs to the large pharmaceutical companies who produce the first three vaccines authorized by countries including Britain, the European Union and the U.S. — Pfizer, Moderna and AstraZeneca. The factories are all still awaiting responses.

Across Africa and Southeast Asia, governments and aid groups, as well as the WHO, are calling on pharmaceutical companies to share their patent information more broadly to meet a yawning global shortfall in a pandemic that already has claimed nearly 2.5 million lives. Pharmaceutical companies that took taxpayer money from the U.S. or Europe to develop inoculations at unprecedented speed say they are negotiating contracts and exclusive licensing deals with producers on a case-by-case basis because they need to protect their intellectual property and ensure safety.

Critics say this piecemeal approach is just too slow at a time of urgent need to stop the virus before it mutates into even deadlier forms. Last month, WHO called for vaccine manufacturers to share their know-how to “dramatically increase the global supply.”

6:02 a.m.: A legal advocacy group challenging British Columbia’s COVID-19 restrictions on worship services and public protests is scheduled to be in court today to argue its case.

A petition filed by the Justice Centre for Constitutional Freedoms also asks the B.C. Supreme Court to dismiss tickets of up to $2,300 each for alleged violations of the public health orders.

The Calgary-based organization says it represents over a dozen individuals and faith communities in the province.

The challenge is based on several sections of the Charter of Rights and Freedoms, including freedom of conscience and religion, and freedom of peaceful assembly.

British Columbia’s Ministry of Health has said it is confident all the provincial health officer’s orders are in accordance with the law, including the charter.

The centre argues that while the government allows hundreds to gather in big-box stores, attending worship services has been prohibited despite groups going to extraordinary lengths to comply with the guidelines issued by provincial health officer Dr. Bonnie Henry.

It says allowing people to gather is essential for the spiritual and emotional well-being of many who go to churches, synagogues, mosques, temples or other places of worship.

The decline came despite a hot summer that had people rushing to crank up the air conditioning at home, the province’s power management agency said.

“We do have this very interesting shift in who’s using the energy,” said Chuck Farmer, senior director of power system planning with the Independent Electricity System Operator.

“Residential users are using more electricity than we thought they would and the commercial consumers are using less.”

The onset of the pandemic last March prompted stay-home orders, businesses to close, and a shuttering of live sports, entertainment and dining out. Social distancing and ongoing restrictions, even as the first wave ebbed and some measures eased, nevertheless persisted and kept many people home as summer took hold and morphed into winter.

With more people at home during the lockdown, winter residential peak demand has climbed 13 per cent above pre-pandemic levels, while summer peak usage was up 19 per cent.

6 a.m.: New public health measures meant to limit the spread of COVID-19 went into effect across nine Ontario regions today, including two that are heading into lockdown due to rising case counts.

The Thunder Bay and Simcoe-Muskoka health units have seen infections rising in recent days, driven in part by transmission of more infectious variants of the virus.

The province activated what it describes as an “emergency break” for those districts, moving them to the grey tier of Ontario’s colour-coded pandemic response plan.

The move will impose a variety of more stringent public health measures in those regions, including capping most indoor gatherings at 10 people, closing restaurants to in-person service and forcing non-essential retailers to operate at 25-per-cent capacity.

Seven other public health units will be easing restrictions as they move down a level in the provincial framework.

The Niagara Region is now classified as red, the Chatham-Kent, Middlesex-London and Southwestern units all move to the orange tier, Haldimand-Norfolk and Huron Perth transition to the yellow level, and Grey Bruce will become a green zone with the least restrictive measures in place.

6 a.m.: The federal government hopes to start receiving doses of AstraZeneca’s recently approved COVID-19 vaccine this week as the flood of shots that flowed into Canada from Pfizer-BioNTech and Moderna last week partially subsides.

Health Canada announced on Friday that it had approved the AstraZeneca vaccine, the third COVID-19 shot to have received regulatory approval since the start of the pandemic.

Canada has ordered 24 million doses of the vaccine, with the majority to be delivered from the United States between April and September.

But two million jabs have been ordered from the Serum Institute of India, and Verity Pharmaceuticals, which is facilitating the institute’s application in Canada, has said the first 500,000 would reach Canadian shores this week.

A senior government official told The Canadian Press on background Sunday that the first of those doses could start to arrive in Canada as early as Wednesday, though the shipment has not been confirmed.

6 a.m.: Ontario’s long-term care minister was aware of the dangers the novel coronavirus posed to the sector long before it was declared a global pandemic, a newly released transcript from the province’s commission on the matter reveals.

The transcript of the Long-Term Care COVID-19 Commission’s interview with Merrilee Fullerton and her deputy shows the pair advocated for stronger measures than what the government was willing to put in place, earlier than they were willing to act.

“You were ahead of the chief medical officer of health in many respects, from your notes anyway,” John Callaghan, the commission lawyer questioning Fullerton, told her.

For instance, Fullerton’s notes from the time suggest she was concerned about asymptomatic spread of COVID-19 in long-term care homes as early as Feb. 5, 2020.

That possibility wasn’t publicly acknowledged by the government until much later.

Read the full story from the Canadian Press here.

5:56 a.m.: Prince Edward Island is now under a 72-hour, provincewide lockdown meant to stop two clusters of COVID-19 cases from spreading any further.

As of midnight, schools and most non-essential businesses are closed until Thursday and Islanders must practice physical distancing with anyone outside their immediate household.

Exceptions are being made for people who live alone or require essential support.

The restrictions were announced on Sunday as health officials reported five new COVID-19 infections, for a total of 17 cases over five days.

5:56 a.m.: Quebec’s mass vaccination campaign gets underway in earnest in the Montreal area today as the province begins inoculating members of the general public.

The province announced last week that it was booking appointments for seniors age 85 and up across the province, or 80 and above in Montreal.

Quebec began accepting appointments last Thursday, with nearly 100,000 booked on Day One of the campaign.

Some regions started vaccinating members of the general population late last week, but the campaign is expected to speed up considerably with the opening of mass vaccine clinics in the Montreal area, including one at the Olympic Stadium.

Outlying regions are mainly expected to ramp up after the March break holiday, which gets underway today. 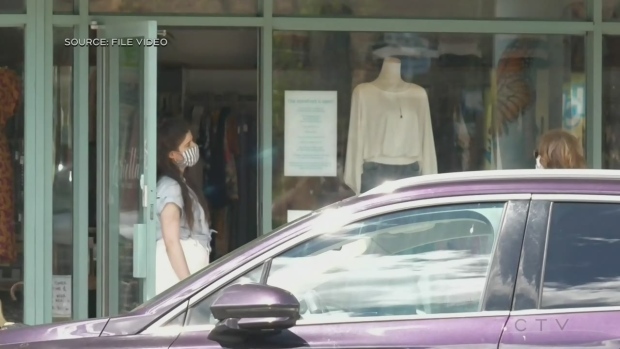 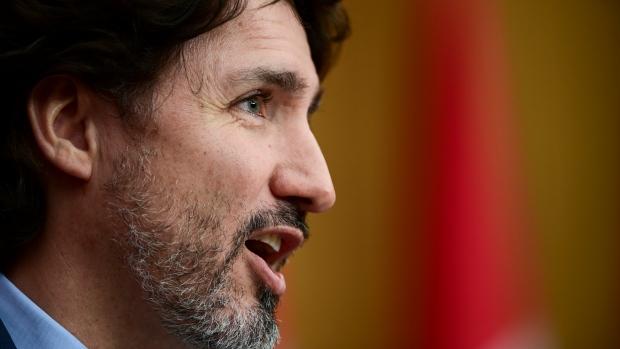