French police are hunting a female spectator who is on the run and faces up to a year in prison after causing the injuries of 21 riders in one of the worst-ever crashes in the history of the Tour de France, as British cyclist Chris Froome reveals the agony of the moment.

British cyclist Chris Froome went down during the incident yesterday, injuring his left side and chest although fortunately not breaking any bones.

Speaking from a hospital bed yesterday evening, Froome said:  ‘In a split-second there were 50 or 60 of us all on the ground.

He added: ‘I’m hoping I can still start tomorrow but at the moment I can’t put any pressure on my left leg and it’s not looking great.’

The determined cyclist managed to get back on his bike today to complete stage two of the Tour de France, pushing through the intensity despite spending several hours in hospital the night before.

Prosecutors in Brittany have launched a criminal inquiry after the unidentified female smiled to a TV camera while waving a cardboard sign with a message written in a mix of French and German to her grandparents during the first stage of the 108th Tour de France on Saturday.

The woman had her back to the peloton with the sign sticking out into the road at handlebar height –  causing German Tony Martin and around 50 other riders to crash. The incident caused 21 injuries, and even forced Jasha Suetterlin of Team DSM to abandon the race.

A spokesman for the Finistere Gendarmerie said: ‘The spectator who caused this accident left the scene before the arrival of the investigators. Everything is being done to try and find her. She was wearing glasses and dressed in blue jeans, a red and white striped sweater, and a waxed yellow jacket.’

Prosecutors have opened a criminal inquiry for ‘deliberately violating safety regulations and so causing injuries that might prevent someone working for up to three months’. This is an indictable offence punishable with up to a year in prison and a fine equivalent to just under £13,000.

The massive crash took place near the summit of the Saint-Rivoal hill in the town of Saint-Cadou, some 30 miles from the end of the 123-mile race from the Atlantic port city of Brest to Landerneau at the mouth of the Elorn River, according to regional newspaper Ouest France.

Tour deputy director Pierre-Yves Thouault told AFP that he is suing the woman for ‘behaving so badly’ to ensure ‘that the tiny minority of people who do this don’t spoil the show for everyone’.

Tour de France winner Bradley Wiggins said he had no sympathy for the fan involved, telling Eurosport: ‘They’re part and parcel of the spectacle of the Tour de France. And this year, in particular, being able to come back onto the route and watch it. I don’t know how you police it.’

Race director Christian Prudhomme slammed the French public for turning out in their droves and behaving ‘inadmissibly’ following the relaxation of the coronavirus lockdown, with ‘people running across the road in front of the race and children left to their own devices’.

‘You come here to see heroes,’ he told French media. ‘If you want to see yourself look in the mirror.’

Tony Martin had nowhere to go when the supporter stepped out, looking at the TV cameras 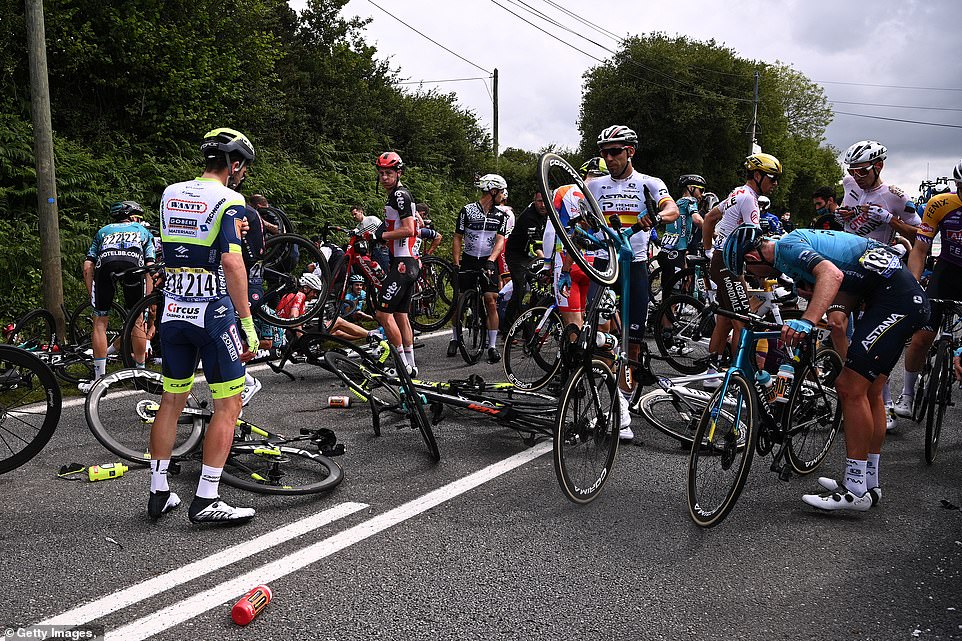 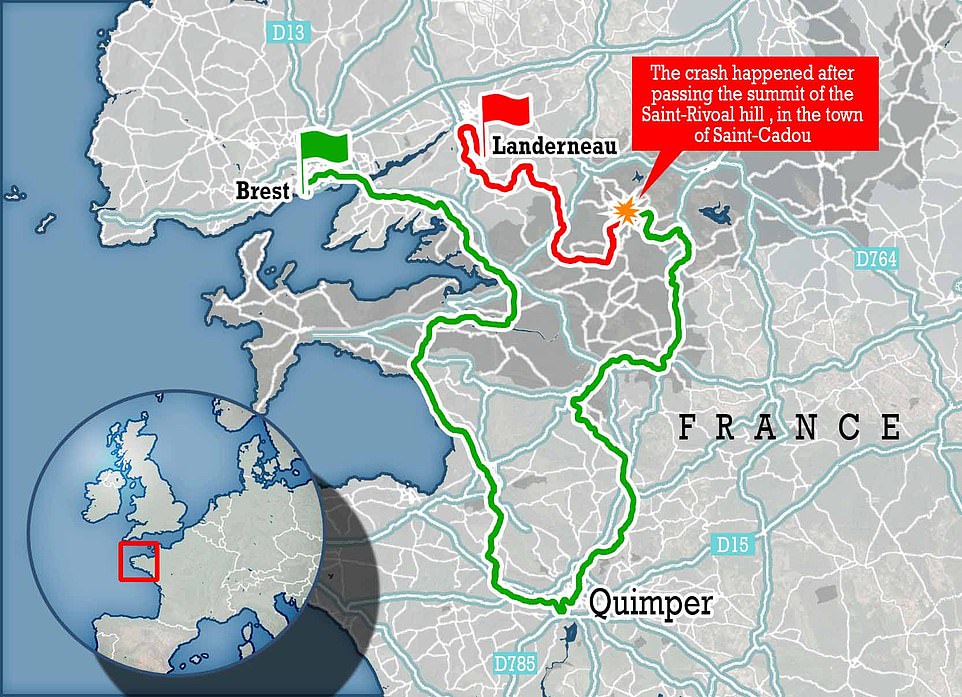 The massive crash took place near the summit of the Saint-Rivoal hill in the town of Saint-Cadou, some 30 miles from the end of the 123-mile race from the Atlantic port city of Brest to Landerneau at the mouth of the Elorn River, according to regional newspaper Ouest France

A fan who was holding a message to her grandparents & grinning for the cameras took out most of the peloton with a cardboard sign ��‍♀️ ��‍♂️ �� #TDF2021 pic.twitter.com/OEZmiSjBE9

The crash, one of two on the stage, saw nine riders received treatment from the race doctor. Many others were injured but not officially recorded.

British cyclist and four-time Tour de France champion Chris Froome, 36, was also injured in a second pile up during the race. Scans showed he avoided any fractures, but Mr Froome said he is suffering from ‘a lot of swelling and bruising’.

He told the BBC: ‘One moment everything was fine heading towards the finish in the last 10km, at 60-70km/h, then a touch of wheels in the peloton and it was carnage with 50 or 60 riders on the floor.

‘Unfortunately there was nowhere for me to go. I braked as hard as I could but I just went into the back of the guys who crashed in front of me. I spent the whole evening in the hospital, but all’s good.’

Overall contenders Tao Geoghegan Hart of Britain, as well as Colombian Miguel Angel Lopez, were among the riders being held up and lost considerable time on the opening day of the three-week race.

Belgian Wout van Aert, one of the favourites for the stage win, was also slowed down but made it back to the main bunch after a long effort, just like eventual stage winner Julian Alaphilippe, who had blood dripping from his knee when he crossed the line.

A spokesperson for Amaury Sports Organisation, the Tour de France organiser, told CNN the company had made a complaint to the authorities.

Tony Martin was the man brought down initially, left with some road rash on his left side

One of the cyclists, Swiss star Marc Hirschi, found himself thrown into the nearby hedges 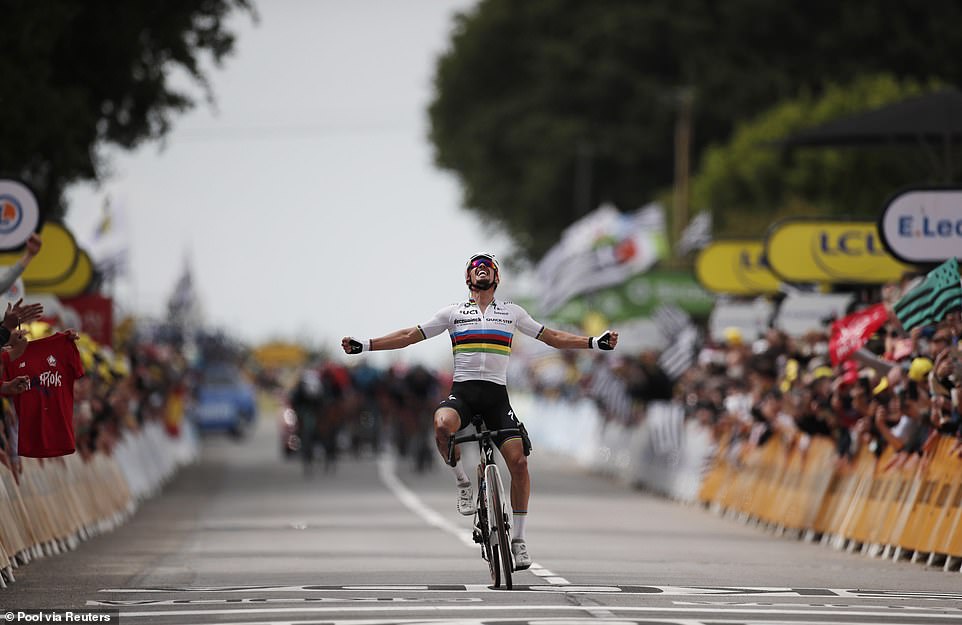 Julian Alaphilippe, who came down in the crash, remounted and went on to take victory

In the wake of Saturday’s crash, an official Tour statement read: ‘We’re glad to have the public on the side of the road on the #TDF2021. But for the Tour to be a success, respect the safety of the riders! Don’t risk everything for a photo or to get on television!’

In a team press release, Mr Martin said: ‘We had everything under control until the crash. I brought the guys to the front via the right side of the road, but crashed into the sign of the spectator.

‘It all happened very quickly; suddenly almost the entire team was on the ground. Many spectators behave respectfully, but unfortunately not this one. Fortunately, Primoz came through it well. I hope the physical damage to myself and the other guys is manageable.’

Mr Thouault said that organisers had filed a complaint against the woman who could now be facing legal action from the tour.

‘This is unacceptable behaviour,’ he said.’ There are safety rules to follow. Spectators don’t cross the road, they don’t take selfies. Frankly, her attitude was insane. The show is the riders, not spectators who want to be on TV.

‘The Tour must remain a party but because of the attitude of a very small minority, it is ruined. We can no longer accept this.’

The Simpsons: Maggie Is The Only Kid To Ever Call Homer "Daddy" 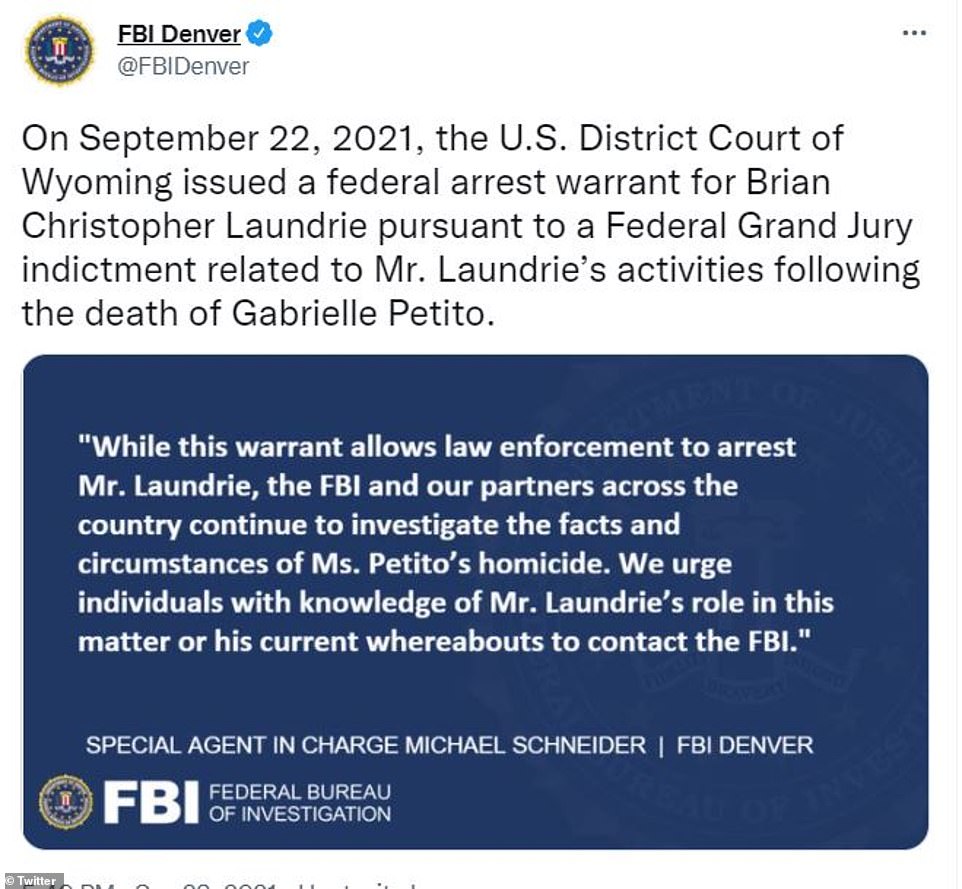